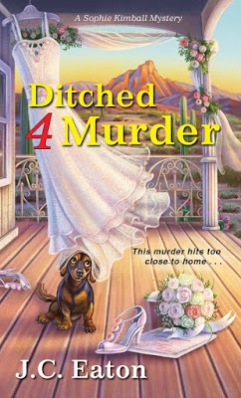 Moving from Minnesota to Arizona was a big change for Sophie “Phee” Kimball. She’s much closer to her mother’s retirement community now–which can drive her a little crazy, but at least her mom, Harriet, has her book club and her chiweenie dog, Streetman, to keep her company. And now there’s even more activity, with Aunt Ina’s upcoming wedding. The seventy-four-year-old bride has roped Phee into working on the tent, the pastries, and even her headpiece in preparation for the ceremony. But it’s Harriet who really gets demanding when a dead body turns up yards from her front door.

Aunt Ina’s fiance is acquainted with the victim–a local millionaire restaurateur murdered at the golf course. Working for a private investigator, Phee is drawn into the case–not just professionally but personally, since Harriet is in a panic about her safety. With a killer on the loose, Phee vows to figure out the plot–that is, if her side job as a wedding planner doesn’t kill her first . . . 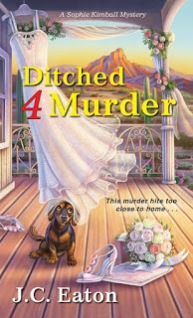 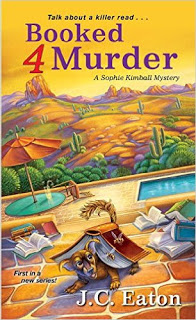 J.C. Eaton is the wife and husband writing team of Ann I. Goldfarb and James E. Clapp who reside in Arizona.

New York native Ann I. Goldfarb spent most of her life in education, first as a classroom teacher and later as a middle school principal and professional staff developer. Writing as J. C. Eaton, along with her husband, James Clapp, she has authored the Sophie Kimball Mysteries (Kensington) set for release in June 2017. In addition, Ann has nine published YA time travel mysteries under her own name. Visit the websites at: http://www.jceatonauthor.com and http://www.timetravelmysteries.com

When James E. Clapp retired as the tasting room manager for a large upstate New York winery, he never imagined he’d be co-authoring cozy mysteries with his wife, Ann I. Goldfarb. His first novel, Booked 4 Murder (Kensington) is set for release in June 2017. Non-fiction in the form of informational brochures and workshop materials treating the winery industry were his forte along with an extensive background and experience in construction that started with his service in the U.S. Navy and included vocational school classroom teaching. Visit the website at http://www.jceatonauthor.com