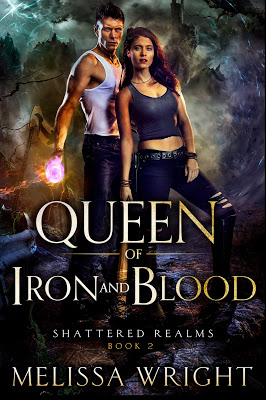 The storm was only the beginning…

Mackenzie Scott is trapped in another realm, but that’s the least of her problems. Magic runs through her veins, and even now she can feel herself changing. She’s managed to help her brother, but in exchange, she’s turning into one of them. Worse, Mackenzie’s not just a monster. She’s their queen.

Separated by realms, Mackenzie and Hunter must save the other’s world. But the divide isn’t the only thing working against them. Beasts and men fight a dangerous battle that pits Hunter and Mackenzie against those they’re trying to protect.

And the clock is ticking.

Hannah was standing by the window, staring out into a world so changed from anything she’d ever known. The sky was there, still and blue, the only constant among the tumult of the last twenty-seven days. It was cerulean, like a painting, bright and promising, all the things she remembered it being as a child. She’d never been one for crayons, but that sky would have made it onto her parents’ fridge.

Hannah’s mother was in the military. Her father. Two of her uncles. Crayon-aged Hannah wouldn’t have touched a gun.

A black-winged bird slammed into the glass inches from Hannah’s face, the noise making her fingers tighten around the stock of her M4. She wanted to turn away from the window, from the disingenuousness of that promising sky, and cross the darkened room. But Hannah was on watch. She straightened, eyes narrowed against the light of a hidden sun, and another bird smacked into the glass with a dull thud.

She walked backward, pacing slowly, heel-first. There was debris scattered over this floor, over every floor in every standing structure since the monsters had come. The monsters they’d chased to the gateway. The monsters that weren’t supposed to come back.

When flying monsters break through the veil into her world, Mackenzie Scott has nothing left to lose. Her brother has been taken, her future has vanished, and all that remains is a desperate need for revenge. After discovering the breach the creatures used as a gateway, Mackenzie devises a plan to stop them, whatever the cost.

When she finds an injured stranger in the street, he just might be the key she needs to succeed. What Mackenzie doesn’t know is that this stranger isn’t the helpless boy he appears to be. He’s one of the monsters. And he’s got plans of his own.

Thrown into a dying city in another realm, Mackenzie is powerless to get back. With the gateway closing, time is not on her side. But the stranger is, and if they can escape execution, this girl and her monster might be able to save both their worlds.

Grab an ebook of the first book in the series for FREE!
Goodreads│Amazon│Barnes & Noble│Kobo│iBooks

Melissa Wright is the author of the Frey Saga, Descendants Series, and Shattered Realms Series. She is currently working on the next book, but when not writing can be found collecting the things she loves at Goodreads and Pinterest. Contact her through the web at www.melissa-wright.com.

1 winner will receive an awesome prize pack with “survival” gear: print copies of The 5th Wave by Rick Yancey, Angelfall by Susan Ee, and King of Ash and Bone by Melissa Wright, plus Be Your Own Hero bracelet, lip balm, compass, playing cards, emergency blanket, and other fun stuff
US only
Ends August 29th