Born in Houston, TX, in 1974, Elizabeth Davis started writing at an early age. Her first book was written for an elementary school assignment when she was eight years old. It was called Silly Excuses—a book about fantastic excuses young children can tell their parents when they have been naughty. Not only did she pass the assignment with flying colors, her teacher loved the book so much that she had it published in the school library. Elizabeth has been writing ever since. Elizabeth earned her B.A. from Bowie State University in Communications Media. Her hobbies include reading, baking, traveling with her family, and life coaching. She currently resides in The Netherlands with her husband Pawel, their son Aiden, and Hermes, the family cat. 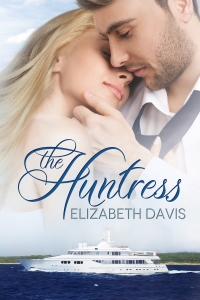 Kaitlin Hawthorne’s life as an heiress to her family’s multinational tech firm was over the moment she decided to pack up and flee with her father’s protégé. Determined to strike out on her own, she sets sail for parts unknown but is haunted by her past mistakes and the fiancée she has left behind. Will the sins of her past ruin her chance for happiness with the man of her dreams?

Marcelo Alesi is a reformed bad boy, primed to revolutionize the tech industry. But an unexpected proposition convinces him to abandon his carefully laid plans for the chance to reclaim the only woman he has ever loved; even if it means playing fast and hard with the truth.

As the two embark on a journey, Kaitlin is drawn into the mysterious organization known as “The Order”. Distrustful of the Order’s motives, and concealing secrets of his own, Marcelo fights to protect and love Kaitlin, the woman he has claimed as his own.

Astor’s gaze darkened. “It’s not like Kaitlin to go to such lengths to wash her hands of me. She’s not a risk taker. It’s part of the reason that I question her suitability as my successor. But she is my daughter and her place is by my side at this company.”

“Why?” Astor’s nostrils flared. “It’s obvious that it’s an emotional and reckless decision. And you’re defending her. I expect more from you, but Kaitlin…”

Broad lines grooved Astor’s forehead. He was disappointed, but he wasn’t surprised that his daughter refused to see reason and would choose to leave rather than sensibly discuss her life decisions with him.

“I know better than anyone how much you want for Kaitlin, but she needs to decide for herself what kind of woman she is. If you keep interfering with her choices, you’ll eventually lose her,” Marcelo warned.

Astor’s frustration increased, thickening the air between them. He didn’t care for the severity of Marcelo’s warning. And he sure as hell didn’t like the disrespectful tone or the forward manner in which his protégé had addressed him.

“This isn’t like you. You’re keeping something from me. What else is there?” Astor demanded.

“I think… she needs me.” Marcelo pushed off the edge of the desk, for a minute unable to meet the gaze of the man he admired most.

Astor sounded low, sarcastic laughter. “I should have seen this coming.” He shook his head in disbelief, his humor quickly dissipating. “We’re finally getting at the truth. You’re asking me if you can go with her.”

“I’m not asking.” Marcelo’s chest rose and fell on a sharp breath.

Elizabeth Davis will be awarding $15 Amazon/BN GC to a randomly drawn winner via rafflecopter during the tour.

Elizabeth encourages her readers to follow the tour and comment; the more they comment, the better their chances of winning. The tour dates can be found here: http://goddessfishpromotions.blogspot.com/2015/03/blurb-blitz-huntress-by-elizabeth-davis.html