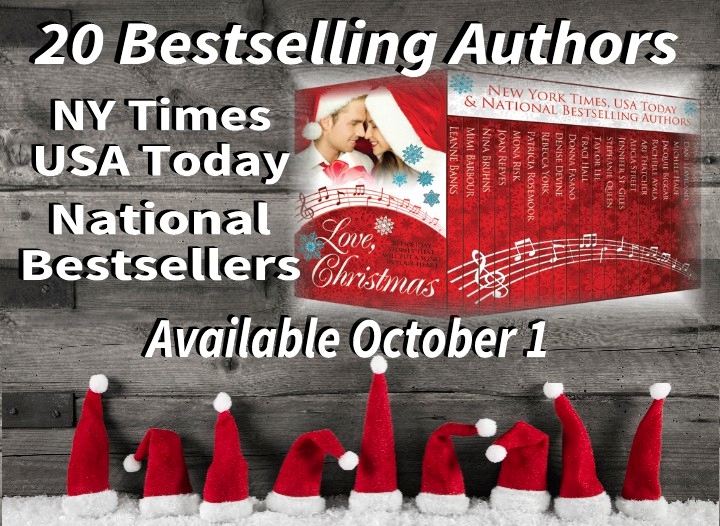 Excerpt from Chapter One

Lively strains of Christmas music floated from somewhere in the rafters as Dina Griffin let her gaze rove over the rows of shampoo bottles lining the shelf. Lemon yellow, bright purple, jarring chartreuse, the plastic containers came in a rainbow of colors, each competing to catch the eye of shoppers. There were products that guaranteed help for damaged split ends; others promising shine and curl; and still others offering to clarify, volumize, or medicate. The abundance of choices astonished her. And to think, all she’d ever expected from her shampoo was clean hair. It wasn’t as if she’d never been shopping, but her busy life usually had her running in, snapping up her tried-and-true bargain brand, and going on her way. Studying the bottles closer, she read phrases like moisture milk, herbal escapes, essential oils, vitamin-laced, and tea therapy.

A few steps further brought her to the matching conditioners, also in a mind-boggling, kaleidoscopic variety. Then came the specialty shampoos for dandruff and hair loss and itchy, scaly scalp conditions. And nits.

Dina shivered inside her bulky winter coat as she ambled along, feigning great interest in the items on display.

She reached the end of the aisle, and just as she stepped out to make her way around the shelving unit, the electronic doors at the front of the store slid open, drawing her attention.

A cop entered the pharmacy, and adrenaline shot through Dina like a high voltage jolt. Perspiration broke out on the back of her neck and her heart began to thud. She turned her head away, dipping both her chin and her gaze as she sunk back as far as possible into her wide-brimmed hood. Mustering a calm nonchalance she certainly did not feel, she skirted the tall, end cap display of hard pretzels and slipped into the neighboring aisle. She stopped halfway down and perused the first-aid section with enough focus to lead anyone who might notice her to think her life depended on finding the perfect band-aid.

The officer wasn’t here for her. He wasn’t. He couldn’t possibly know she’d run from the police in Baltimore. He couldn’t.

Dina dared not chance looking behind her, but her stomach sank when she sensed someone approaching. As the person got closer, she could feel the mass of him. It was the cop. Had to be. And the man must be built as solid as a brick wall.

He wasn’t here for her. He wasn’t. She repeated the silent mantra, bending at the waist and grasping the first package within reach. Tweezers, she realized. Silver. Pointy-tipped.

Her fingers were trembling, so she released the plastic and cardboard container. However, when she pulled her hand back, her coat sleeve caught the edge of several packages and tweezers went tumbling like inept circus acrobats. Dina scrambled, snatching them up, and hurrying to re-hang them on the metal display hook.

The cop stopped directly behind her. She straightened, closed her eyes, and drew in a breath in an effort to calm her anxiety. And that’s when she smelled him.

The scent of fresh cut sandalwood tickled her nose. Warm and slightly spicy.

He cleared his throat and her eyes flew open.

Could he have picked up a splinter on the job somehow? Be in dire need of a pair of pointy-tipped tweezers? Maybe he’d cut himself shaving and needed one of those small circular band-aids. That would be her luck, all right. A splinter-laden, razor-nicked cop in need of first-aid supplies, and she just happened to be standing right in front of the display.

Her only goal in walking around the pharmacy had been to warm up a little. Although the day was sunny and the outside temperatures on the mild side this morning, it was still winter, and the damp concrete she’d slept on had left her chilled to the bone. Her hips had been aching and her feet had felt like brittle bricks of ice when she’d arrived, and she’d just wanted to limber up, work the cold out of her joints and toes in a heated environment.

How could he possibly have known…

Dina hesitated, nerves forcing her to swallow even though her mouth had gone as dry as course sand. She was not going back to Baltimore. Not until she absolutely had to. What compelled her next action, she had no idea—fear, panic, sheer survival instinct—but she spun on her heel and glared into his face.

“I’m not going anywhere with you. This is a free country, and I’ve got rights. I’m staying right here, and there’s not a damn thing you can do about it.”

An instant of shock registered on his face. But his jaw quickly set, his lips flattened, and he seemed to grow three inches when he squared his shoulders and straightened his spine.

Oh, Lord, save her. Had she really just gone all rebel on an officer of the law?

“Yeah,” he said, his tone soft but firm, “this is a free country. And you do have rights. Just so long as you don’t take things that don’t belong to you.” He pinched the sleeve of her coat between his fingers. “So put back whatever it is you’ve stolen, and come up to the front counter with me. We need to have a chat with the manager.”

“Wait. What are you talking about?”

He muttered under his breath, then said loud enough for her to hear, “Being uncooperative is only going to make matters worse for you. Your parents are already going to be upset when I call them. It’s bad enough you’re cutting school. Shoplifting is a serious offence.”

She looked at him as if he’d suddenly sprouted a grotesque, green beard.

“All right.” He sighed. “We can play this any way you want.”

Her bravado withered like a sycamore leaf in the dead of winter when she felt herself being propelled toward the front of the store. There must have been only an inch of her coat fabric in his grip, but it was enough to force her to toddle along beside his long-legged stride like a twelve-year-old.

I’m thrilled to participate in the Love, Christmas Anthology, and I hope you’ll look for our holiday bundle later this fall.

USA TODAY BESTSELLING AUTHOR DONNA FASANO is a three-time winner of the HOLT Medallion, a CataRomance Reviewers Choice Award winner for Best Single Title, a Desert Rose Golden Quill Award finalist, a Golden Heart finalist, and a two-time winner of Best Romance of the Year given by BigAl’s Books & Pals Review Blog. Her books have sold nearly 4 million copies worldwide and have been published in two dozen languages. Her books have made the Kindle Top 100 Paid List numerous times, climbing as high as #5.