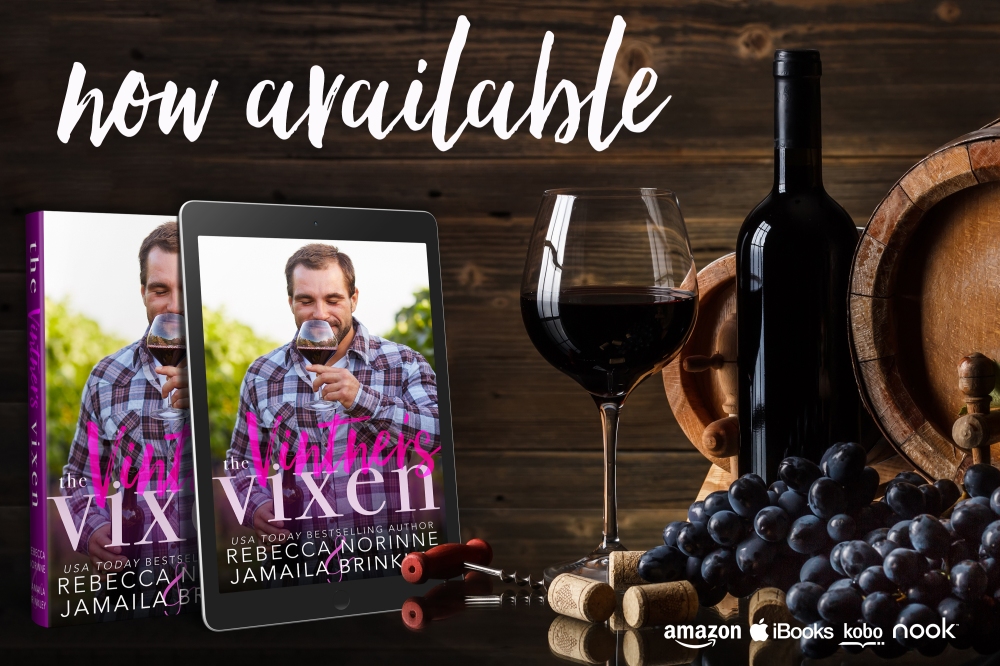 Welcome to River Hill, where the only thing more intoxicating than the wine is the man who makes it.

With movie roles for “curvy best friend” drying up fast, actress Angelica Travis is happy to be leaving Hollywood behind for a project she’s truly passionate about: renovating an historic bed and breakfast in peaceful wine country. She’s got plans and power tools ready, but an inconvenient attraction to her obnoxious new neighbor is NOT on the agenda.

Winemaker Noah Bradstone wants nothing more than to cultivate his grapes and win awards for his wine. But when construction on the B&B next door threatens his vines, Noah goes on a rampage – and comes up hard against the sexiest starlet he’s ever seen. Exactly the sort of woman he’s vowed never to get involved with again.

Angelica and Noah might be able to resolve their differences over a glass of some very fine wine, but when her opportunity at breakout stardom comes calling, all bets are off.

They strolled together under the canopy of the redwoods, pine needles crunching beneath their feet. Technically, Molly was supposed to be on a leash, but at this early hour the path was nearly deserted, so Noah let her trot ahead, her tongue hanging out of her mouth as she explored the forest floor with her nose.

“It really is beautiful here,” Angelica remarked, her head tipped back to take in the grandeur of the ancient trees. “Like a whole other world.”

She was right, of course, but right now Noah was having a hard time seeing past her beauty. “Maybe the most beautiful,” he murmured, his chest panging with a longing he wasn’t used to feeling.

Angelica’s face dropped forward and their eyes locked. Silence hung between them, the only sound their breaths moving in and out of their lungs and a chirping bird far off in the distance.

At the same time, they each took a step forward, and then another.

“What are you doing to me?” Angelica whispered as she rested her hand on his forearm.

Burning to touch her, Noah placed his hand on her hip and tugged her against his body. With his other hand, he cradled the back of her neck and dropped his face forward. “I could ask you the same thing.”

When their mouths met, Noah felt the power of their kiss deep in his gut. With a groan, he licked the seam of Angelica’s lips and she opened to him, their tongues tangling in a slow and steady mating. She whimpered into his mouth and her hands found their way around his neck as she arched forward, the tips of her toes digging into the dirt. Noah’s hand skated from her hip to her ass and he squeezed, relishing the feel of her soft flesh against his palm. As their kisses grew hungrier and more frenzied, Noah forget where they were, his only thought “mine” as he backed her up against a tree. Rolling his hips so she’d feel how badly he wanted her, he trailed his mouth down her jaw to her neck. Angelica panted, and her leg came up to wrap around him. Cradled against her, Noah pressed his erection into the vee of her thighs again with a slow thrust.

“Oh god,” Angelica moaned as her head fell back and her eyes dropped closed. “You feel so damn good.”

Before Noah could tell Angelica that she felt like nothing he’d ever experienced, Molly interrupted them with a high-pitched squeal and then a series of deep, shuddering barks. In his lust-filled stupor, at first Noah didn’t realize what was happening, but when his dog tore past hot on the tail of a rabbit, he snapped back to reality. He captured Angelica’s lips in one last searing kiss and then pushed away, quickly scanning the area for his dog. Spotting Molly galloping up the hillside after the frightened bunny, he took one last scorching look at the woman his brain was screaming belonged to him. “This isn’t over. Not by a long shot.”

And then he took off at a sprint.

Jamaila Brinkley writes historical romance with a hint of magic. Her Wizards of London series features thieves, duchesses, witches, and more indulging in mayhem and romance in Regency England. She is a member of the Romance Writers of America, and was a finalist in the Romance Through the Ages contest in 2015.

Jamaila came to romance as an avid reader of fantasy and science fiction, and found that her favorite historical romances seemed ripe for an injection of magic. Her favorite historical period is currently the Victorian era, and she’s never happier than when immersed in a multi-book family series.

Jamaila lives outside Baltimore, Maryland in a house that is perpetually under renovation with her husband and twin toddlers. You can find her blogging about romance, writing, parenting, cooking, and more on her website at www.jamailabrinkley.com, and posting pictures of her lunch on Twitter as @jamaila.

When not writing, Rebecca can be found watching rugby, drinking craft beer, or traveling the globe in search of inspiration for her next story. Originally from California, Rebecca currently resides in Dublin, Ireland, with her husband.
To receive news about Rebecca’s books, sign up for her newsletter, or keep in touch via Facebook, Twitter, or Instagram. You can also visit her website or drop her an e-mail anytime.