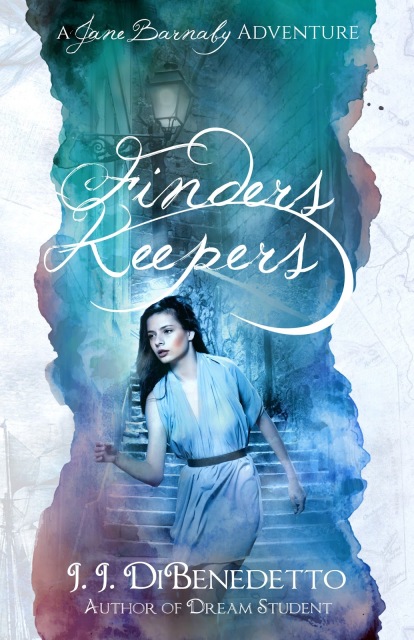 It should have been a simple job. All archaeology student Jane Barnaby had to do was pick up a box her professor needed and deliver it to him at his dig site, along with his new car. Yes, his office was in Oxfordshire, and his dig site was in Spain, a trip of 1,400 miles across three countries and two bodies of water. Still, it should have been simple.
And it was, until Jane discovered she picked up the wrong box by mistake. Not the one with boring pottery samples, but instead the one with priceless ancient Egyptian artifacts. The one that a team of international art thieves is after.
Now she’s chasing – and being chased by – the thieves. And she’s picked up a pair of passengers who claim they can help her outwit them, get her professor’s pottery back and return the artifacts to their rightful owner. If only she could figure out which one of them is working with the thieves and which one she can trust in this high-stakes game of finders keepers.

According to Dr. Welldon, the trip from Oxfordshire to Dover should take two hours, two and a half at the outside. Being careful, Jane had built in extra time. Her intention had been to leave by ten AM and give herself four hours to reach the port, and then an hour to buy her ticket and figure out how to get the car aboard the boat. But that was already shot to hell; she didn’t start until eleven thirty, and she’d lost nearly an hour missing the ramp onto the M40. She couldn’t afford to fall further behind, and that meant she couldn’t miss Exit 1A.
Unfortunately, Jane was so busy thinking about how off schedule she’d gotten that she missed several signs indicating the approach of the exit. The first sign she actually saw told her that it was 250 feet away. And it was a right-hand exit. She was four lanes over to the left. Jane took a deep breath, muttered to herself, “Oh, God, I am an idiot!” and proceeded to cut off a taxi, a tour bus and what looked like a brand-new black Mercedes.
Jane only had a momentary glimpse into the Mercedes, but she was pretty sure that she saw a Styrofoam cup fly out of the driver’s hand and shower him with coffee. She felt guilty, but only for a fraction of a second, just long enough for her brain to register the other Mercedes – the one directly in front of her.

J.J. (James) Dibenedetto’s fans would swear he’s got a sixth sense when it comes to seeing into the minds of others and often wonder if his stories could possibly be fiction. He enjoys suspending disbelief with suspenseful paranormal tales that are a perfect blend of reality meets fantasy.
His popular Dream Series continues to delight readers with each and every exciting installment.
Born in Yonkers, New York, he currently resides in Arlington Virginia with his beautiful wife and a cat he is sure has taken full advantage of its nine lives. When it comes to the cat, he often wonders, but then again it might just be his imagination.
Amazon ✯ FaceBook ✯ Twitter ✯ Goodreads ✯ Website