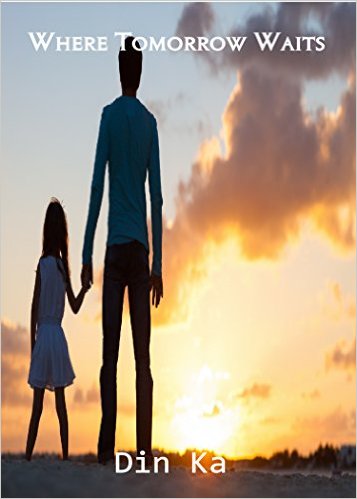 Where Tomorrow Waits unfolds over the haunting landscape of Cambodia during the Khmer Rouge war era. Dara, a young girl whom instead of enjoying the carefree life of a teenager, is trapped between the opposing burdens of her mother’s secret affair and her own loyalty to her father.

Soon enough, Dara discovers her mother’s selfish secret is just the beginning of her sufferings as it leads her on a path filled with more lies, betrayal, and molestation. As Dara’s father, Muirye, learns about the consequences behind her mother’s actions, he sets forth to make a sacrifice that would ultimately change Dara’s life forever. But before Dara can learn to accept the changes her father has brought forth into her life, she must first survive the Khmer Rouge genocide.
Dara is left with a heartbreaking choice— risk her life trying to escape to America, a promised land of opportunity, or stay behind and sacrifice everything to search for her father, who might not even be alive. The choice she makes takes her on a haunting journey that spans three decades of guilt, lies, and what if questions. The deep dark twisting truth Dara accidently uncovers, which her mother had been guarding all her life, is something Dara considers far worse than death.
Will Dara ever be able to accept the deep dark twisting truth she has been unknowingly living with all her life, or will death finally grasp her by its fingertips?

Din Ka was three years old when his family first moved to the United States from Cambodia. He’s an advocate dog lover aside from writing, and loves to spent time outdoors with his four-legged rescue child and long time lovely girlfriend, in which they both have hopes to one day open a non-kill animal shelter. He’s a huge Motorsport fan, loves Formula One racing and never misses a race. He’s also addicted to the Travel Channel, Discovery Channel and most of all the Science Channel and loves learning about the world around him and how the universe works. He’s also a graduate of California State University of Fullerton with a Bachelor of Arts in TV/Film writing. Where Tomorrow Waits is his first novel.

To be honest, this is not a normal read for me. Usually, I find real life stressful enough and so avoid tough subject reads like this.

I’m glad I made an exception for this story.

This is the tough story of a child growing up in a war-torn country. Set in Cambodia during the rise of the Khmer Rouge, the sheer brutality of war and genocide is told in a way that leaves the reader gasping at the cruelty of humans.

Told in first person through young Dara’s eyes, we face betrayal, anger, confusion, pain, love, denial- a range of emotions guaranteed to twist our insides and pray for a better world.

This is not an easy read, and though the punctuation is rough in areas, I don’t hesitate to class this as a must read.

I give Where Tomorrow Waits 4 lovely kisses