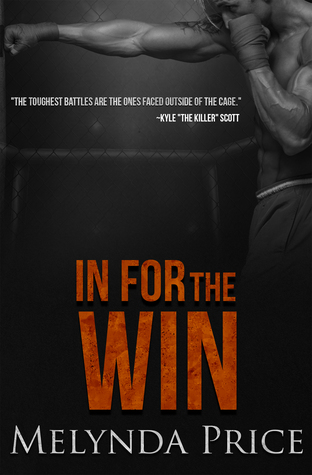 To win his heart, she’ll have to give him the one thing that could drive him away—the truth…

Kyle Scott’s talent for fighting paved the way for a career he never wanted, but needed to survive. Five years later, he doesn’t recognize the man he’s become. All his focus and energy has been poured into raising his little sister, leaving no time or interest for anything beyond a casual hook-up—until he meets a woman who sends his life spiraling out of control.

Penelope Cantrel isn’t looking for love, but she’s always ready for a good time. If she keeps everyone at a distance, they can’t discover how broken she is, or the secrets she’s running from. When she crosses paths with the sexy MMA fighter, Kyle’s reputation as a cage-banging manwhore doesn’t concern her. She isn’t interested in a commitment. But after their white-hot attraction leads to a night of mind-blowing sex, neither of them will ever be the same again.

When Pen starts receiving threatening messages, her deepest fears are realized as she becomes the obsession of a man who will kill to possess her. Concerned for her safety, Kyle offers to pose as her boyfriend to deter her unwanted admirer, but his heated touches and those not-so-innocent kisses don’t feel like he’s acting. Could the infamous playboy be falling for her?

As the threat against Pen escalates, her stalker is closer than they thought. Kyle is the only thing standing between her and a madman, but she fears trusting him with her secrets could be a fatal mistake.

Tonight, when Pen had crawled into his bed, Kyle foolishly hoped she was feeling it too. But as hot as the sex had been, something was still missing. An emotional connection? He didn’t really know, because he’d never felt or wanted one before. But he’d sensed she was holding a part of herself back.

Their disconnect hadn’t been physical. Fuck, he’d never felt so much pleasure—ungloved and coming inside her. The sensation, the intensity…there were no words. Even now he was growing hard just from the memory. No, that definitely had not been their problem. The issue, he feared, was emotional. And the struggle to synch Pen’s body with her mind was going to be a challenge. Question was, could he do it? Because he was starting to wonder if his efforts wouldn’t be fought at every turn.

Something in her past had broken her. He didn’t know what, how, or by whom, but her reaction to him earlier left little doubt in his mind. And even the possibility that she’d been abused—physical?—sexually?—filled him with such protective rage, a part of him almost feared discovering the truth. But how could he be the glue to help mend her broken pieces if he couldn’t figure out how they fit back together? She was a puzzle, a complex enigma he wanted to solve because deep down he knew the prize would be her heart.

Pen shook her head, looking utterly and completely lost. “I don’t know, Kyle. This isn’t supposed to be real. And it scares me that you’re changing the rules.”

“And you didn’t change the rules when you climbed into my bed? What the fuck was that about, then? You think because you made them, you can break them without consequence? Or is it because I fuck around that you think you get a pass—that this means nothing to me.”

As each word flew out of his mouth, he could see it ratcheting her fear. And yet he couldn’t seem to shut the fuck up. Her defenses were high and there was no getting past those walls, but he kept battering them with his verbal ground and pound assault. He wasn’t leaving this room until one of them tapped. Unfortunately, he was starting to get concerned that someone was going to be him.

She shook her head in denial, stepping back. And because he was a fighter, he advanced—countering her move for move until her retreat was halted by the bed.

“Oh, now it’s a mistake? Because I’m not interested in being your boy-toy? Because you’re scared I might actually want something from you, like, oh…an ounce a trust?—a glimmer of emotion? Something to tell me that I might mean something more to you than a cock to get off on!”

Her eyes narrowed, little hands tightening into fists, and he knew he’d pushed her too far.

“What the fuck, Kyle? I thought I was the one with the vagina! Just because we fucked that doesn’t give you a one-way pass into my life. You don’t have any more right to my secrets than I do yours. You don’t see me trying to pry into your private life, do you? We’re friends—with benefits—and if you want us to stay that way then respect my goddamn boundaries.”

“With benefits? Thanks anyway, I think I’ll pass. I can fuck anytime I want, I don’t need you for that.” He turned to storm out, but her parting words won that round and had him tapping out.

“I was talking about the friends part…”

Melynda Price is a bestselling and award-winning author of contemporary romance. Her Against the Cage series has finaled in many awards such as the RONE, USA Today BBA, Golden Quill, National Readers’ Choice, and New England Readers’ Choice.

What Price enjoys most about writing is the chance to make her readers fall in love, over and over again. She cites the greatest challenge of writing is making the unbelievable believable, while taking her characters to the limit with stories full of passion and unique twists and turns. Salting stories with undertones of history whenever possible, Price adds immeasurable depth to her well-crafted books. She currently lives in Northern Minnesota with her husband and two children where she has plenty of snow-filled days to curl up in front of the fireplace with her Chihuahua and a hot cup of coffee to write.